Combining steel and leather, these impressive fantasy bracers are a sturdy piece worthy of any warrior in LARP. Imposing yet more mobile than full plate, this is the perfect armor piece for fighters, soldiers, warlords, mercenaries, and warmongers on the battlefields. 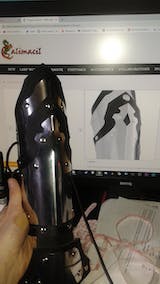