Who never heard of the feats of the Moerr Rekkr Raudr d’Odinn, the Glorious Red Warriors of Odin? Everywhere they ventured, their chief, Torfa the Just, inspired respect both by his knowledge and by his actions. Attributing his valiance to Odin, god of victory, Torfa the Just, an outstanding Hilmir*, trained his warriors to the handling of the two-handed sword personally.

Clad in the traditional red tartan of their clan, a fur on their shoulder, and equipped with their two-handed sword, these braves lived for the glory of their name. No fight was declined, whether it was amical or mortal in nature, because it was to the challenger to announce his preference.

The viking sword comes from the universe of Seyrawyn, creation of Martial Grisé and Maryse Pepin. On their lands where many people coexist with druids and dragons, the legend says that Torfa the Just had accepted and won a challenge thrown down by the King of dragons himself. Thus, his fabulous two-handed sword would have been the ultimate price for his bravery.

From the fine double grooves to the engraved knotted pattern, this sword showcases Seyrawyn’s latest blade profile in its full two-handed length. Echoing the impressive details of its blade, the hilt’s striking gold traceries crown a deep red leather-like faux-wrap. Completed by an intricate almost-glowing emerald green pommel jewel, this sword is cast in our Calimacil foam to make it a safe LARP weapon of unequaled durability.

This weapon suits many valiant and glorious characters. From the viking inspired warriors, to the undercover king’s heir, this two-handed sword will please all strong and noble fighters for many campaigns to come.

I dunno it’s just nice. A bit heavy, but it’s easy to get used to. 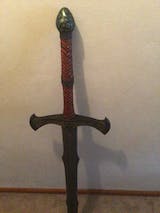 This sword is simply beautiful and everyone who sees it says so too. But the looks aren’t everything - it has a really good balance point about 10cm in front of the hilt and is FAST! Very nimble to use, it just feels so good. The reach allows lightning fast strikes at range. You will not be disappointed with one of these.
Ten out of ten!

Just...amazing !
We needed a great sword for our king in LARP and ordered that sword without any particular expectation...but it's wonderful !

The Valhendyr is absolutely wonderful. Nothing in this world is perfect, just like the Valhendyr. But, for a durable, visually stunning foam sword, it’s pretty darn close. From the egg shaped pommel to the tip of the blade; the attention to detail on the design is spectacular. I’ve already used it to spar with my brother. It holds up great and the heft feels just right. He has the Geralt Steel Sword already. It was after his purchase that it made me want a Calimacil product as well! Seeing the durability and price for good looking foam weapons means Calimacil is the place for larp/sparring needs. I’ve got some pictures of the lovely Valhendyr with Geralt’s Steel Sword to compare. 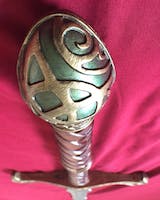 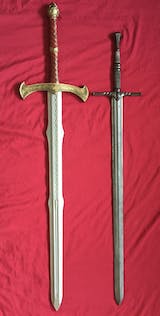 This sword is absolute perfection. It is gorgeous and very well designed and crafted. Calimacil has truly upped their game with this piece. Its everything one could want in a two handed fantasy weapon.