Become Henry, a blacksmith’s son, and enter into the service of a noble who assigns you engaging tasks and quests. How you choose to shape your character depends entirely on you. Choose how you want to be known: you can be merciful, pardon someone or surrender in battle, or you can be feared and threaten other inhabitants. No matter what you do, the world will give you an appropriate, reasonable response to your actions!

Created in collaboration with Warhorse Studios, here is Henry's sword from the universe of Kingdom come: Deliverance, a single-player, first person, medieval open world RPG, set in 1403 Bohemia In the Holy Roman Empire. This official replica is crafted and designed from original in-game assets. Made of safe foam, it is soft enough to ensure a safe usage in mock combat and LARP, but is firm enough for cosplay and prop usage. From the universe of Kingdom come: Deliverance, a single-player, first person, medieval open world RPG developed by Warhorse Studio, our official replicas are crafted and designed from original in-game assets. Made of safe foam, they are soft enough to ensure a safe usage in mock combat, but are firm enough for cosplay and prop usage.

Get the game here: https://www.kingdomcomerpg.com/

This sword both looks amazing and feels amazing. It's a well-balanced weapon, and it's very sturdy - it doesn't show any scratches after being used. The only possible downside is that the handle might be a little short for people with very large hands - luckily not my problem.

this sword is one of the best i’ve owned would defiantly recommend it, not only does it look realistic it feels realistic, on top of a great addition to my arsenal the postage was very quick considering that i live in australia and it was shipped from canada. all in all a great sword for anyone whether your interested in larp or are a fan of the game.

Love this thing. Hilt fits so much better in my hand than other LARP weapons

A larp weapon with a semi accurate balance point Is a very pleasant suprise. This weapon handles and feels just like it should for a period single hander and has the blade geometry to match with a beautiful pommel and hilt with sharp edge perfect to bind with. My only complaint is the foam was a little on the firm side with my order but otherwise very pleased.

It seems year after year, Calimacil keeps increasing the quality and look of their weapons.
Henry's sword is no exception to this. I ordered it this winter and immediately fell in love with it. I've always been a fan of the more realistic designs of swords, which usually manifests into a far more plain choice in weapon. But the Henry sword easily fills the role of a sword for a more noble character, or a blade carried by a more common one.
The detail throughout this piece is incredible, from the inscription on the blade through to the engravings on the pommel. For a sword of its size, it's certainly heavier than most current Calimacil, but I find it works well for its balance and as such, makes it very easy to wield. The blade is also not too bulky, so it fits into scabbards quite nicely without having them be too large. I would say that my only criticism is that the handle is a bit on the smaller side, so it might be tricky to use with two hands if you have larger hands and desire to do so. I have smaller hands, so using it one handed or hand and a half isn't an issue. The LARP I attend, Ashes of an Empire, compliments such versatility and as such this swors fits in well there. 0The durability, as per Calimacil standard, is phenomenal too.
All in all, this is another great weapon from Calimacil the would compliment anyone's arsenal. 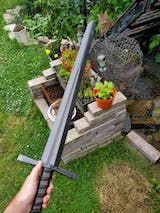 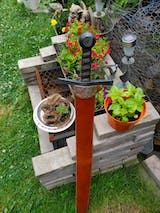